The South Australia Squash Academy website does not require the User to create an account or register.

Enquiries: email: This email address is being protected from spambots. You need JavaScript enabled to view it.

If not ambidextrous the initial challenge the player has is to develop the non preferred hand.

Imagine rarely having to use your backhand

(In this section the author has decided to write in the first person).

Forty years ago I had a student who was ambidextrous and changed hands to hit the ball. I encouraged him to make a decision to use just one and develop a backhand. This was based on the fact that his method was to swap the racquet from the left hand to the right and vice versa.  The rationale being that when playing at a higher level and when the opponent was positioned near the front wall and hit the ball with extreme power to the side that he was not holding the racquet he would struggle to change hands in time to hit the ball. This logic was correct.

However on (April 2nd 2019) at around 3am I had an epiphany. If I grip the racquet with both hands I will have time to react to a power drive by releasing the appropriate hand and using the other hand to hit the ball. On these ocassions I would always be using a forehand.

Thus, I realised that although my initial logic was correct, I had failed to examine the 'but' scenario. That is, looking for better logic and then presenting it.

Wow! Imagine squash players using a double grip in between rallies (may not when reflexing when the ball is hit at the body) and then releasing one hand and hitting the ball with a forehand with the other hand.

Wow! Imagine tennis players who already use a double grip in between and during rallies (may not when reflexing when the ball is hit at the body) and then releasing one hand and hitting the ball with a forehand with the other hand. Imagine never having to run-around to play a forehand and thus, covering less distance and being better positioned to play the next shot. What about the extra power!

I only used a backhand when an extreme reflex was required (ball aimed at the body). Furthermore, I could straight drive balls I would normally have to boast; I could boast balls I could not get back into play and I had more time to react to my opponent's shot. Furthermore, I was better positioned to play the next shot (the "T" felt so close).

Nat Wolf offered his time to experiment with this new concept. After a couple of months doing solo practise, on Sunday 23rd June Nat was ready for two feeder routines. Both Aiden and I (feeders) were amazed at his skill level on his non preferred side. His enthusiasm was infectious as the quality of his hitting and the ease which he approached this new concept even surprised me.

We continued experimenting for the next three months which included matchplay and the results were astonishing.

Back on court (Sunday 7th July 2019) with Nat and Colin doing two feeder routines before engaging in some matchplay. Match conditions…. I watched with some apprehension. The theory passed with flying colours. Nat's focus on re-gripping the handle with both hands was critical and as the match progressed it was evident that he was rewarded for his efforts. My apprehension turned into excitement. Nat could not contain his.

If you don't employ "My Strategy", occasionally, you may not create enough time after releasing one hand to re-grip the racquet with that hand. For example, when the opponent is in either Zones D3, D4 or D5 and you are positioned incorrectly at the front.

However, if you do you use "My Strategy" you should be positioned correctly and the opponent drives the ball with extreme power at your body you will have time to regrip the racquet and use a single or two handed backhand. That is, if the ball is driven perpendicularly towards the middle of your body you can release either hand (or not) and use your backhand. Furthermore, if the ball is driven cross court from either side to the left or right of centre you can release your left hand (or not) or your right hand (or not) and use your right hand backhand and left hand backhand, respectively.

On court (Sunday 28th July 2019) with Nat and Jarrod (student) doing two feeder routines. Again, Nat maintained his emphasis on, after hitting the ball, to quickly re-grip with non hitting hand. Furthermore, I suggested to Nat not to be concerned about which hand was high or low on the grip. Although, we did discover that when Jarrod played a boast from the back then Nat had time to move the single grip down the shaft.  After the routines they had some matchplay. Jarrod was impressed how Nat had more time to react which then gave Jarod less time to retrieve the ball. A great session.

I am hopeful that one of my coaches will begin to teach this technique.

If I was a young man, when appropriate I would encourage my students to use the ambidextrous swing.

Several years later on Monday 10th of May 2022 one of my squash students sent me the video below.

The Pros and Cons of playing ambidextrously with The Nash Swing

. can straight drive instead of boasting (squash)

. can boast when unable to get the ball into play (squash)

. has more time to react and consequently can reflex better (squash and tennis)

. Is better positioned to play the next shot (squash and tennis)

. does not have to run around to use the preferred forehand (tenni

. when hitting the ball off the back foot the player is closer to the ball (squash and tennis)

. when hitting the ball off the back foot the player creates more opportunities for more of the same angles which is extremely critical in tennis (squash and tennis)

. when hitting the ball off the back foot the player creates more opportunities to close the angle and thus cover less distance

. when hitting the ball off the back foot and the player is stretching to reach the ball the player creates more opportunities to return the ball 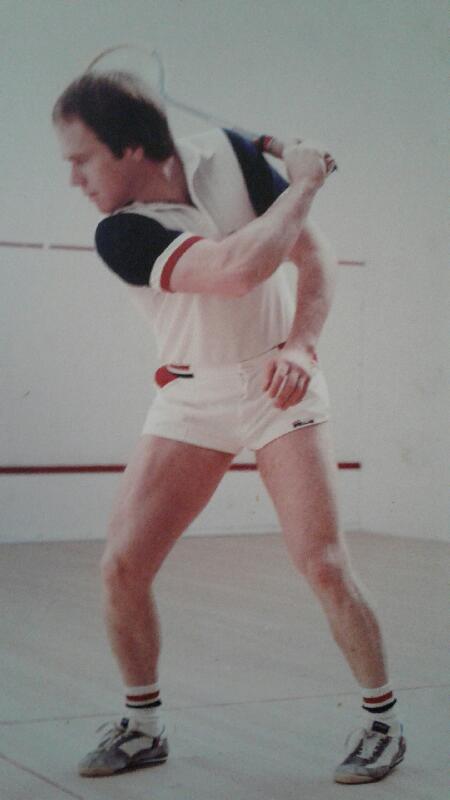 Currently, there are over three hundred videos and over one hundred diagrams on the website. The author suggests that when visiting examine one menu at a time and scroll down sequentially examining each menu before moving on to the next.

The author will be adding one video per month which will appear above.

The author will be adding new text on a regular basis without videos. Although, not ideal, this will be beneficial to the User.